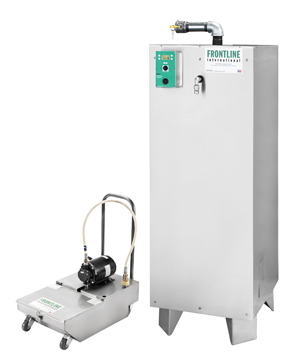 Harvard University Dining Services (HUDS) is the oldest collegiate foodservice establishment in the country, as well as one of the largest. With a staff of 650, they serve an average of 25,000 meals a day during the academic year and 5 million meals annually. And a lot of those meals involve fryers and cooking oil.

Director for HUDS Operations & Facilities Robert Leandro has been doing the job for 40 years. He not only oversees renovations and maintenance but also is HUDS’ environmental safety and compliance manager. Leandro realized the university’s foodservice operations needed a better system for managing used cooking oil to comply with the university’s spill prevention and containment program.

“Like a lot of folks, we had 55-gallon drums and dumpsters outside for waste oil,” Leandro said. “Employees would try to pour hot oil in, it would spill; it was not a great system. We wanted to bring the storage inside and find a way to minimize spills.”

He wanted a system that would work for all 30 locations in which they operate on Harvard’s campus. And HUDS had a particular challenge. Unlike chain restaurants, HUDS establishments’ menus are different every day, and they also change seasonally. He needed a solution that could work everywhere there was a fryer on campus, whatever the setup, menu, or volume.

Leandro was introduced several years ago to Frontline International at the annual National Restaurant Show in Chicago. He enjoyed their conversation and was impressed with their products. “It was the people that made the real difference,” said Leandro. In 2000, he made the decision to start phasing in Frontline’s equipment.

Initially, they used Frontline’s caddy system to shuttle waste oil from fryers to storage tanks, into which it could be pumped hands-free. That was a big improvement over previous methods they had used. The caddy system proved to be very economical, and it is ideal for operations where space is tight or where older fryer equipment does not allow for a direct-plumbed system. Utilizing caddies eliminated the old method of an employee physically carrying used oil in buckets, so it lowered the risk of spills, injuries, and accidents.

In 2004, Harvard underwent a renovation to some operations in its dining facilities, and Leandro took that opportunity to install Frontline’s direct-plumbed system. The direct-plumbed system is fully automated, allowing oil to flow from fryers to storage tanks with just the push of a button. “We’ve even retrofitted some of our existing fryers so they can be pumped to the tank,” said Leandro. “To this day, I haven’t had any problems.”

Leandro’s approach has even changed the way his suppliers do business. For example, he was such a fan of Frontline’s equipment that he required his renderer to provide Frontline’s tanks. However, the company from which he purchases HUDS’ fryers wouldn’t build or alter their fryers in order to allow the used oil to be pumped directly to the storage tanks. But Leandro knew many other vendors who would. He pushed his supplier to change. “I went to the president of the company and said, ‘I can’t buy from you anymore. These other companies, they will do it.’ Now, their fryers are suddenly able to [be direct-plumbed]!” He added, “If people are hesitant, I can assure them: Whatever frying company you are buying from will adapt their fryers. They have to.”

Leandro’s previous foodservice positions include cook, butcher, pantry steward, production manager, general manager, and Assistant Director for Residential Dining at Harvard. He was promoted to his current position in 2005.

Because of his wide-ranging experience in the field, Leandro is often asked for his opinion or to speak at industry gatherings such as for the National Association of College & University Food Services. “I always suggest Frontline. They are the company I use, and I’ve had good experiences with them. And our cooks love the system.”

Frontline International, Inc. designs, manufactures, and distributes superior commercial foodservice equipment for the storage, handling, and disposal of cooking oil. With Frontline, you own your own equipment, negotiate your own oil rebates, and have the freedom to choose your own oil vendors. Frontline and its Smart Oil Management systems offer users more freedom and more control over their processes and their profits. For more information, contact Frontline International, Inc. at 187 Ascot Parkway, Cuyahoga Falls, OH 44223. Phone: +1 330-861-1100. Toll free: 1-877-776-1100. Web: http://www.frontlineii.com. Email: info@frontlineii.com.

In busy commercial kitchens, fats, oils, and greases are generated by many different pieces of cooking equipment alongside fryers. Grills, rotisser...

MINNEAPOLIS — The foodservice industry is under intense pres...

When is a vegan dish not a vegan dish? When it’s fried in the same oil as meat-based foods. Even if you regularly filter your cooking oil, standard...

In many communities, retail supercenters have replaced the town square, offering a collection of products—including food—that in days gone by used ...

The year 2000 wasn’t just the start of a new millennium, it also ushered in a new era in cooking oil handling for foodservice. That was the year Fr...